This Tuesday found me back in Kyoto staying in a youth hostel. I checked in Monday a few minutes before midnight and went straight to bed. In the morning I was in the common area eating breakfast and drawing, when one of the other guests at the hostel began a conversation with me, and discovered that I didn’t speak. He flipped through my sketchbook and then I left to go bike riding along the river.

When I came back later that night many of the guests were in the common area drinking tea and chatting. I took my place among them and continued drawing. It didn’t take long before they realized I didn’t speak. Interestingly, the guy who interacted with me that morning was also there and helped explain my muteness to others.

I silently participated in some conversation, but mostly sat drawing. Eventually everyone acclimated to my muteness. Midnight was rapidly approaching and I wondered if I would speak.

By that I mean, every time I’ve ever been in a social group setting on a Tuesday, someone who knew about my Tuesday experiment had always been present to explain my muteness to others. Otherwise meeting and communicating with new people on a Tuesday happens on a one on one basis.

I prefer not to speak after midnight, but instead to wait until I wake up Wednesday morning. But the unique opportunity this provided was too tempting to pass up. I told myself next time a question was directed towards me in the conversation that didn’t make sense to answer with a nod or shake of the head that I would reply with the answer verbally.

A full twenty minutes passed after midnight before that qualification was met, when I was asked which of two possible transient verbs sounded more natural (to settle a debate between a Russian girl and a Polish girl), I responded verbally, and the Russian girl completely lost it. The look of shock on her face and the way she almost fell off her chair were fantastic. The polish girl was more slow to realize what was happening then looked at me with a slightly embarrassed smile.

The Russian girl was a flurry of questions afterwords, but I responded to all questions with “It’s a long story that’s not worth getting into now.” To their frustration and my obvious delight.

san francisco
san fran
Ali
you?
Jamalzadeh
That’s my famous grand uncle
makes it confusing
Farsi is what Iranian’s speak
would you mind
posing for a portrait?
don’t feel like you have to
tired?
i’ll also eventually scan
it, and can send it
to you
and can you
write your name for me
ula knap?
is there a wireless
network/password here?
i want to onsen!
public bath
and i want to get fat
deliciousness
my main goal on this
trip is to pig out
on japanese food
does anyone here like to play chess?
so it’s a little confusing:
you are white
i’m black
queen
it’s a popular russian
past time right?
how about piano?
is that still popular?
have you written
anything on guitar?
white always goes first 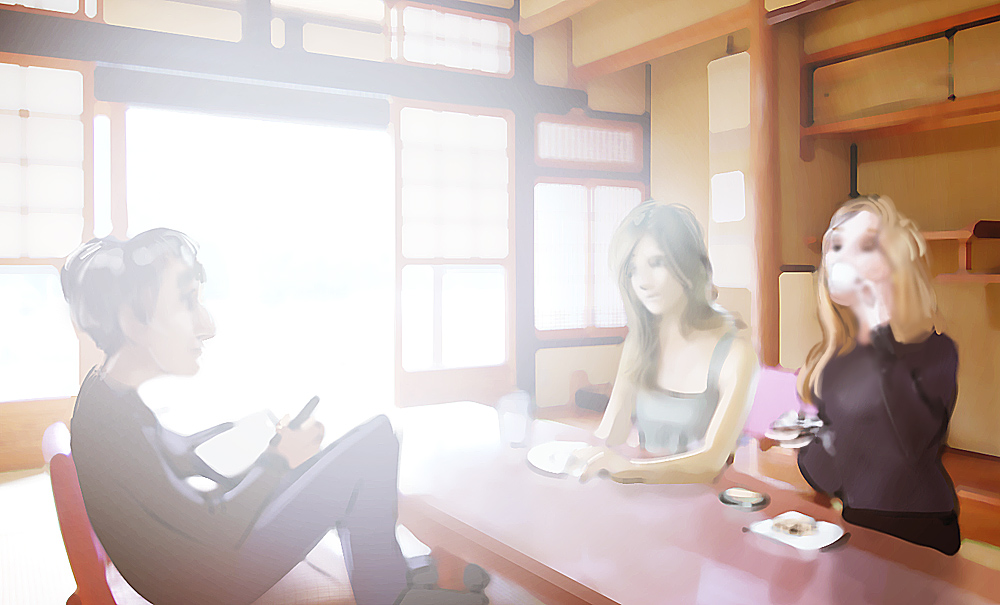