I‘ve been playing Breath of Fire 4 off and on for over 15 years. I started playing it sometime in high school, and it was one of the last games I played as I was transitioning from someone who has too much time on their hands to someone with not enough.

Like most Japanese RPGs at the time, it’s a huge time sync, and is complex enough that if you’re not playing it regularly you quickly forget whats going on and what you need to do next.

So needless to say I got to distracted with my increasingly adult life, and every few years when I tried to dive back in, I was too disoriented to make much headway.

So finally a year ago I just started the game over from the beginning and played through a few hours at a time, when I was home visiting from London, and finally beat it!

At around the same time I was increasingly being called upon in my career to design and direct the games I was working on, and I couldn’t help but notice how much of my design sense and philosophy was formed by Japanese RPGs from the 90s. Also how much of an advantage it gave me when it came to critical thinking around design and game direction. It felt like someone with a background in ballet learning how to dance modern, or someone with a background in classical music learning jazz. That having logged about a thousand hours playing JRPGs throughout the nineties grounded my design sensibility in a way that would give me a distinct advantage later in life. I found myself often having to explain certain puzzle mechanics or design symmetries to other much more experienced designers who were taken back by how I knew these things, and upon reflection I can only think that I absorbed these ways of thinking from the countless hours playing JRPGs as a kid.

I realised that JRPGs from this era are almost the polar opposite of games today. Games today are designed to have broad shallow interest, easy to pick up, easy to put down, and meant to appeal to the widest most casual audience. Game production cycles are as stripped down as possible, and are often compromised by release schedules, device compatibility, licencing demands, frame-rate and multiplayer optimisation and many other considerations that ensure few games are released with little more than their “minimal viable product” specs. In game cut-scenes are usually just recorded from in game graphics, lengthy ending sequences or ending sequences at all are increasingly rare, as are mini games, bonus content, extra playable character, bonus worlds etc.

JRPGs from the 90s however were ridiculously overflowing with levels, characters, abilities, mini games, secret and bonus content, items, and the list goes on and on. You’ll be playing for 20 hours before playing a level that suddenly introduces a racing mechanic that could have been a complete game unto itself. The mini-games alone might span ten different game genres from fishing, racing, puzzle, tactical strategy, first person shooter etc. Often the average player will spend over 40 hours playing the game having completely missed a large number of levels, characters, abilities, mini-games that they just never came across in that particular play-through.

Games of this era were also built by hardcore game nerds for hardcore game nerds. Which meant the difficulty, the design, the strategy, the timing, the character and story development all assumed that you were a devout, committed, educated gamer that was ready and willing to really take your time and give your undivided attention for 30 – 100 hours. Now games are in trouble if they assume an attention span of more than a few seconds, or a control scheme that isn’t immediately intuitive to someone who has never played a video game.

Developing a AAA game in the 90s required a small team of nerds about a year of their lives. Whereas now a AAA game requires about a hundred people multiple years and often with a huge amount of the game assets being made overseas. The ability to really massage and polish a game, add lots of interesting side quests and bonus content, or to even care enough to do so in the first place has all but vanished. This also means that making a weird challenging original game used to just involve convincing your 5 game nerd friends to work in your basement for a year, to now needing to convince a multinational corporation to give you a game studio with a hundred highly payed professionals and equipment and years of development time. Sure you can still just crank out a cool weird game with your friends today, the indi game market is as alive as ever, but the result will likely just be piled under an avalanche of other indie games that similarly evaporate from lack of exposure or interest. Companies spend many millions in advertising just to get a small simple game into the top 10 in an app-store for a week, in order to give it a chance to catch on.

I didn’t intend for this to turn into a screed against modern game development. I’m glad I’m developing games now, as the tools have never been better, the platforms more numerous, or the access to markets, technology, information, funding sources more generous. Now anyone can be a game developer, just like now anyone can be a photographer, a film maker, a painter, a musician or any of the other art forms that used to be reserved for a select few. But like all those other mediums, there was a golden age when the classical rigour of the elite (and often untalented or unqualified few) is finally disseminated to the many. For a while there is a flourishing of new ideas and brave new directions pioneered while still being grounded in the taste and discipline of the old guard, before finally giving way to the diffusing sensibility of the public. So in the same way the avant garde musicians of the early seventies represent the epitome of pop music, or the auteur film makers of the seventies, or the painters of the renaissance, or the fusion chefs of today, likewise I think the golden age of games was most vibrant during the JRPGs of the 90s. And Breath of Fire 4 was one of them.

As an ode to this game and to commemorate finally beating it I painted a bit of fan art: 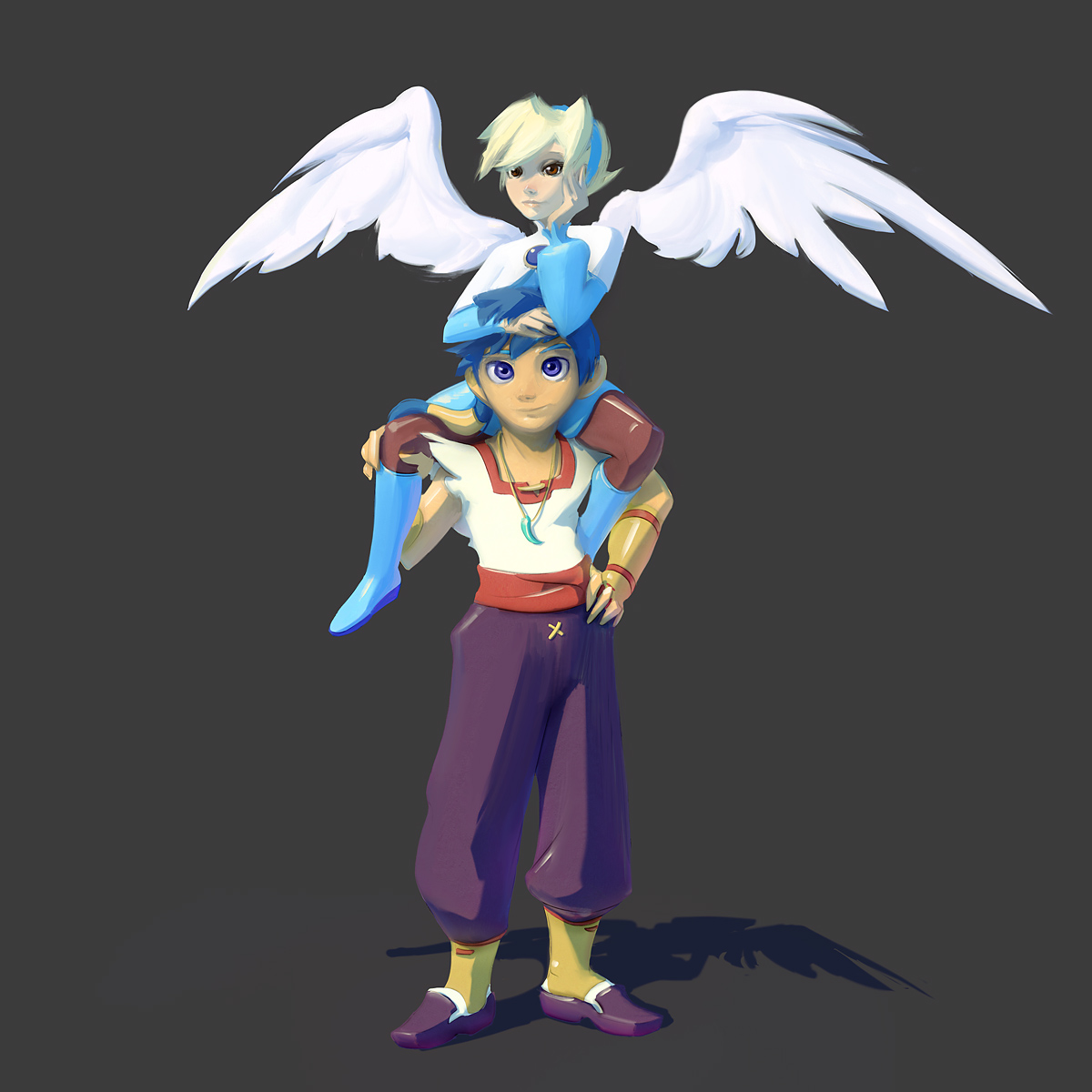