A few months ago, while on lunch break, I was walking to a small park to eat lunch.

A silver sports car was passing me on the street and I noticed the driver suddenly do a double take in my direction. I watched the car as it slowed down and pulled over to the side of the road and stop. The car stopped up ahead of the direction I was walking, so I soon came along side it. As I passed, I looked into the car and saw a young Asian man looking towards me. When he saw I noticed him he began beckoning me across the street. I walked around to the other side of the car so as not to be in traffic and leaned down to speak with him through the open passenger’s window:

Me: Um, good. Is there something I can help you with?

Him: (mumbles something in a coy effeminate manner)

Him: (More clearly) I want to have fun wich-you…

Me: Oh. Ha. No, that’s not how I roll. I thought you wanted directions or something.

Now for the record I’m thin, and was wearing white shoes, a scarf, an argyle sweater, a leather/canvas book bag, and tight-ish pants. So I don’t make an argument for American masculinity the way a thick necked jock in jeans and a tee-shirt might. But I hadn’t considered that my dandy-ish leanings would be so potent as to cause a gay man to suddenly pull off the road.

I walked away with my back to his car, into an empty park at dusk. These thoughts made me feel a bit unnerved especially as his car hadn’t driven off afterward as I expected it to…

I realized that feeling of vulnerability was probably something slightly akin to what a woman must feel when they’re being asked out by a stranger (Something I’ve done many times and hadn’t considered how it might be threatening) Of course I was stronger and more capable then this guy and had a sushi knife in my bag to boot, and there was nothing the least bit aggressive or overbearing in his manner. Still, I couldn’t help but feel unsettled afterward.

This experience has taught me to be much more empathetic towards the possible uncomfortably vulnerable feelings I may inadvertently instill in a woman when asking her out, no madder how affable and nonthreatening I may think I’m being.

*I learned from my students later that the park near school is called “Pickle Park”, and is a notorious gay pickup spot. So this experience wasn’t as inexplicably random as I initially thought. 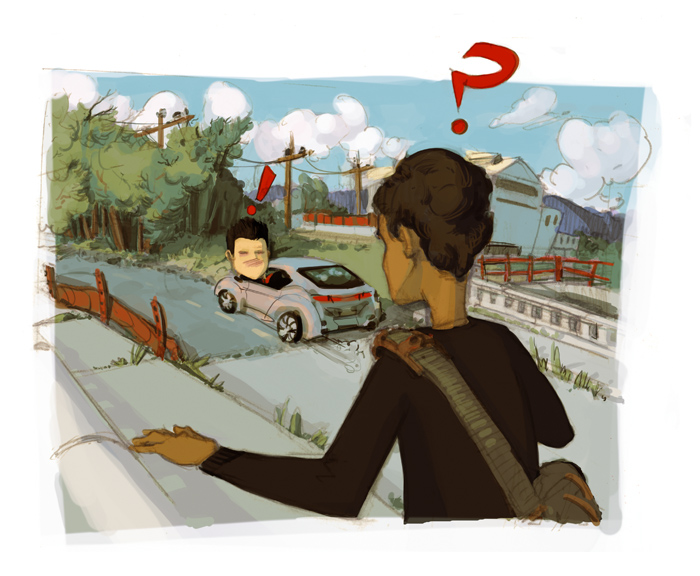